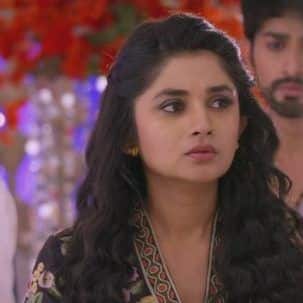 In the last week we saw that Ganga tells Guddan that she is on her side and wants her to be successful in her plan. But Guddan’s sister is not ready to understand and tells the cops to arrest them. Guddan stays calm despite Ganga’s antics. Ganga tries to convince Guddan to not send them to jail. Cops inform Akshat that Guddan’s sister has filed harassment charges against Ganga and Avinash. Akshat cross-questions the cops and asks then about the arrest warrant. Akshat tells the cops that Avinash is his elder brother and hugs him. The entire family gets emotional and accepts Avinash. Guddan tells everyone that her challenge is still unfinished. The entire family clicks a selfie and enjoys themselves to the fullest. Ganga tells the family that they will play a game wherein they will have to mimic Guddan’s style. Saraswati gets angry and plans to separate Ganga and Guddan.

In tonight’s episode in the party, a few people call Ganga and Avinash names. Guddan comes to their rescue and tells them that she is Ganga’s elder sister-in-law. She even tells Dadi that Saraswati is spreading negativity about their family. What will happen next? Will Guddan expose Saraswati’s true colours? Stay hooked to find out.

Uttar Ramayan: When Ramanand Sagar couldn’t direct the initial episodes of the TV show — find out! |

Buniyaad is back but where is Anita Kanwar? |

Uttar Ramayan: When Ramanand Sagar couldn’t direct the initial episodes of the TV show — find out! |

Ramayan is one of the most-watched TV shows in India. The TV show had been re-telecasted on DD national amidst...

Buniyaad is back but where is Anita Kanwar? |

With Buniyaad making a grand comeback to national television, interest in the cast of the project has been revived all...

‘It’s all cool between Sidharth and I,’ Rashami Desai clarifies that Bigg Boss 13 has mended her relations with Sidharth Shukla |

Bigg Boss 13 is still being talked-about immensely. One of the highlights of the season was the bittersweet equation between...

Deewar E Shab: The Finale Wraps Up All Loose Ends – A Little Too Neatly

UN Agency Expects Locusts To Reach As Far As Bihar, Odisha But Not South India

UN Agency Expects Locusts To Reach As Far As Bihar, Odisha But Not South India

PM Modi Not In “Good Mood” Over Border Row With China: Donald Trump

India At No. 9 On Global Coronavirus Chart, Overtakes China In Deaths