In letter to RBI Governor, Rahul Gandhi seeks relief for Kerala farmers over repayment of loans

The Congress leader reminded the central bank’s chief of Kerala’s situation a year back, which witnessed the worst floods in over a century. He said the impact of floods is further aggravated by the inability of farmers to repay agricultural loans due to crop loss coupled with falling commodity prices of cash crops that affects their ability to bounce back. “Kerala has witnessed a tragic spate of farmer suicides in the wake of banks initiating recovery proceedings under helpless farmers under the Securitisation and Reconstruction of Financial Assets and Enforcement of Securities Interests Act, 2002 (SARFAESI Act).”

“Despite the demand from the State government and the opposition parties to extend the moratorium on repayment of loans to December 31, 2019, the state level banker’s committee as refused to consider the demand,” he added.

Wayand, which is Rahul Gandhi’s Lok Sabha constituency, too has been severely affected due to torrential rain and landslides. To this effect, Rahul had also written a letter to Prime Minister Narendra Modi asking for Centre’s assistance in tackling the flood situation. Rahul had himself visited flood-hit areas, including worst-hit Puthumala in Wayanad district and Kavalappara near Nilambur in Malappuram district, earlier this week to take stock of the situation. 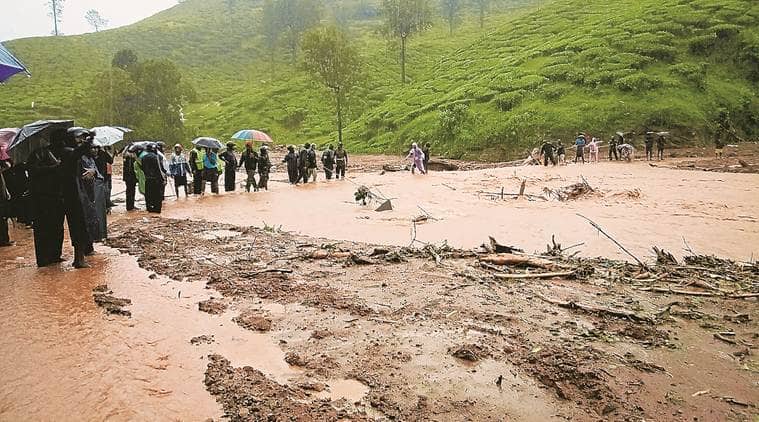 In the letter to Modi, Rahul wrote: “I would like to highlight the twin crises, one that affects the life and livelihood of people in Wayanad and second, the critical status of the ecology in an area that is known as a global hotspot for biodiversity with the potential to contribute to carbon sequestration benefiting the country as a whole.”

With several parts of Kerala receiving downpour since Tuesday night, many low lying areas have been waterlogged, even as the toll in the
rain-battered state has gone up to 95 so far. A red alert has been sounded for three north Kerala districts of Malappuram, Kannur and Kozhikode, which bore the brunt of the flood fury and landslides last week.

Met authorities forecast heavy to very heavy downfalls at isolated places in Kerala. Meanwhile, Chief Minister Pinarayi Vijayan told reporters
here after a cabinet meeting that the government was trying to provide all possible help to those affected. Announcing the financial assistance, Vijayan said as per the state disaster response fund (SDRF) criteria, Rs 10,000 would be given as immediate assistance to the calamity-hit families.

Those who have lost their homes and land would be given Rs 10 lakh, while those whose houses had been destroyed or damaged would get Rs 4 lakh, he added.

Lucknow: Even as the spotlight turns on acid attack violence with the release of the controversial film 'Chhapaak' on the...

Were Ram & Sita Insulted at Periyar Rally? As Rajini Kicks Up Row, Here’s What Facts Say About ’71 Event

Chennai: When actor Rajinikanth paved way for intense debate across the country over the controversial 1971 rally by social reformer...

Will Decide Next Action Depending On Nitish Kumar’s Reply: Pavan Varma