Rohit Sharma’s wife Ritika Sajdeh on Tuesday shared an adorable boomerang video featuring her husband and daughter Samaira. The video, shared in her Instagram story, shows Rohit showing Samaira something in his phone and Ritika’s caption says that the Indian opener is seeking Samaira’s “approval for his post” before uploading it on the social media. “Sammy giving approval for his post,” Ritika captioned the video. Mumbai Indians, the franchise Rohit leads in the Indian Premier League (IPL), also posted the picture on their official Twitter handle. “On a scale of 1 to 10, how cute is Rohit’s new social media manager?,” tweeted Mumbai Indians asking fans to rate what they think of Rohit’s new social media manager. 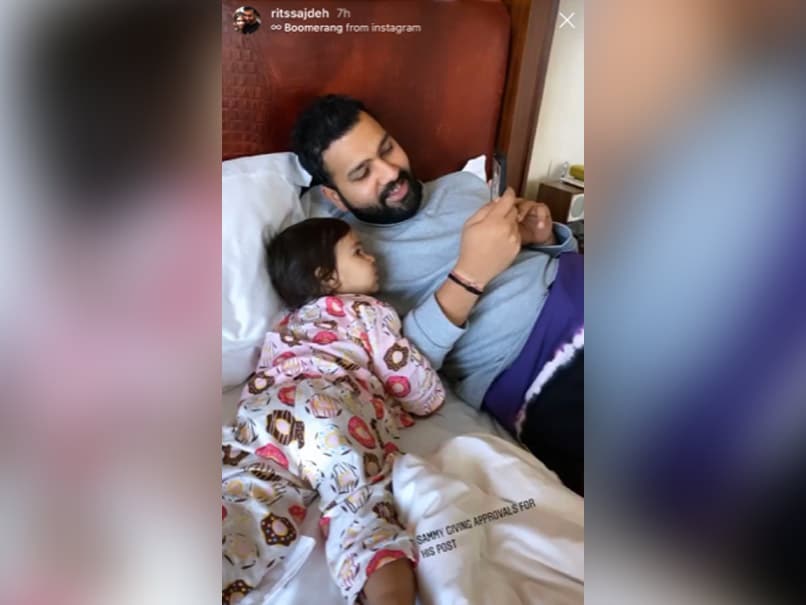 On a scale of 1 to 10, how cute is Rohit’s new social media manager? #OneFamily #CricketMeriJaan @ImRo45 pic.twitter.com/8W3EEFzAXg

Rohit returned from the New Zealand tour mid-way after injuring his calf during the fifth and final Twenty20 International.

Rohit had scored 60 runs before he limped off the field and was later ruled out of the One-Day International and Test series in New Zealand.

Last week, Rohit had shared an adorable picture with his wife while on Valentine’s Day.

In ODIs, Rohit was replaced by Mayank Agarwal while Shubman Gill replaced him in the longest format of the game.

In Rohit’s absence, the Indian openers Mayank Agarwal and Prithvi Shaw failed to give India solid starts upfront as the visitors suffered a humiliating 3-0 whitewash in the 50-over format.

India, however, would look to turn things in the remaining two Tests and consolidate their position on top of the ICC World Test Championship points table and finish the tour on a high.