Sachin Tendulkar took to Instagram on Monday to post a picture from his visit to Berlin, capital of Germany. Sachin Tendulkar is in Berlin for the Laureus Sports Awards. Soon after the former India batsman posted the picture, former India captain and current Board of Control for Cricket in India (BCCI) president Sourav Ganguly came up with a comment that sent fans into splits. Sourav Ganguly, who recently took a dig at Sachin Tendulkar for enjoying too many holidays, reminded his former opening partner about his previous comment and said “Tendulkar.. I was not wrong …” 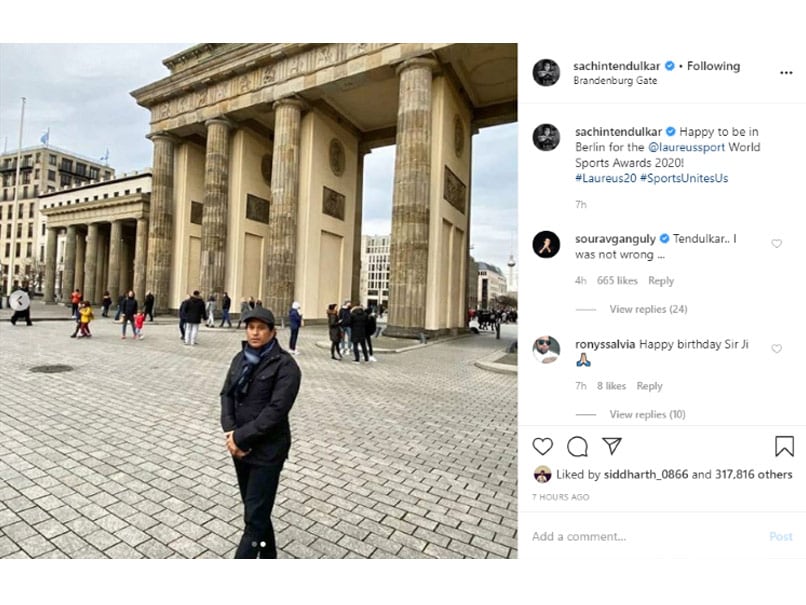 On February 13, Tendulkar and Ganguly were involved in a friendly banter on Instagram.

Tendulkar replied to Ganguly and said it was a worthwhile holiday as they raised USD 10 million during the Bushfire Cricket Bash.

Tendulkar, 46, recently ‘came out of retirment’ to face an over at the Junction Oval.

The leading run-scorer in ODIs and Tests faced Australia woman all-rounder Ellyse Perry in the special over during the innings break of the Bushfire Cricket Bash match.

The charity match was organised by Cricket Australia (CA) in a bid to raise funds for the victims of Australian Bushfire.

The Bushfire Bash was originally scheduled to be held as a curtain raiser to the Twenty20 Big Bash League final on Saturday, but with downpours expected, CA said it would no longer be possible at the Sydney Cricket Ground SCG. The match, postponed to Sunday, was shifted to Melbourne.

Due to the bushfire, at least 33 people lost their lives and it destroyed thousands of homes in Australia.

In the match, former West Indies captain Brian Lara and Ricky Ponting entertained the Melbourne crowd by showcasing their skills with the bat.

Adam Gilchrist XI fell one run short of Ricky Ponting XI while chasing 105 in the 10-over per side game.