Weight Loss: Include This Quick Raw Banana Bharta In Your Diet For A Healthy Lunch (Recipe Inside)

by newsfeed
in recipe
0

Banana is undoubtedly one of the most popular and common foods across the world. It is a plant, which is used completely (from fruit to the stem) as foods and cooking ingredients. Banana, when ripen, is a very well appreciated fruit world-wide; whereas not much of the global population is well aware of its raw version. The green or raw banana is consumed as a vegetable and is of high nutritional value and several health benefits, including weight loss. Known as kaccha kela in Hindi, the green banana gets placed as a delicacy in Indian veg cuisine. It is consumed in various forms – from crispy chips to rich kofta curry. The best part about raw banana, unlike the ripen ones can be stored for long without refrigerating it.

Raw banana have a mild flavour with starchy texture and a slightly bitter taste.  But if boiled and prepared well, they can be turned into some amazing delicacies. Other than its taste, raw banana has several health benefits. The resistant starch in the vegetable helps in growing gut-friendly bacteria. It also helps in regulating blood sugar levels. The rich fibre content in banana helps one to feel full for longer time. Hence, it can be included in your diet for losing weight. It is also rich in vitamins and several other nutrients. 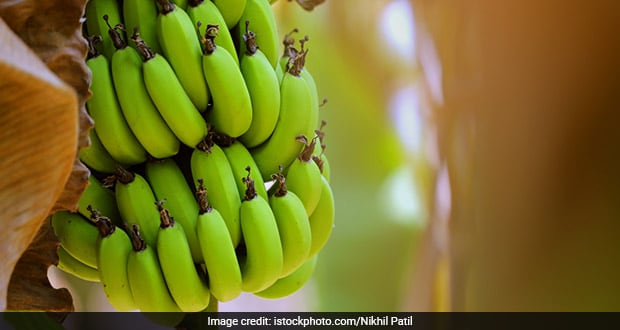 Soak the raw banana for at least 10 minutes.

Wash them and cut the edges from both the sides.

Boil them in pressure cooker, with some salt and haldi (turmeric) powder.

Once the bananas are boiled, take them out on a plate and peel the skin.

Now, add onion, green chilli, coriander, salt and mustard oil and mash them well to get a thick consistency.

Fry the onions with kalonji (nigella seeds) and dry red chilli in mustard.

Roast some cumin and coriander seeds and grind them coarsely in mortar and pestle.

Pour the fried onion, kalonji, red chilli, along with the mustard oil, and mix well with the boiled banana.

The raw banana bharta is all set to be enjoyed with steam rice. We would suggest you to mix the food with hand and eat to get the ultimate taste of the bharta-mixed rice.

Got Only Bread And Cheese To Put Together Sunday Breakfast? Here’s What You Can Do!

Dosas are on many kinds, this tomato dosa is a tangy version you may likeHighlightsDosa is a popular South-Indian snackDosa...

Got Only Bread And Cheese To Put Together Sunday Breakfast? Here’s What You Can Do!

HighlightsA bit of cheese can save just about any dishDo not overcook cheese, there are chances of it burningGrilled cheese...

Neither Animal Rights Nor Environment, Most People Turn Vegetarian For Their Health- Study

The recent trend of more and more people giving up on non-veg food and opting for vegetarian or vegan or...

Stuffed garlic breads are always a delight to bite intoAnything oozing with cheese is a dish good enough for us;...