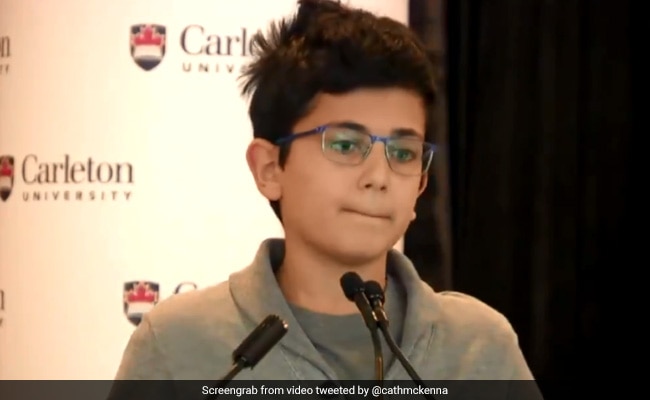 Ryan Pourjam delivered a moving eulogy for his father.

A 13-year-old boy’s moving eulogy for his father, who died in the Iran plane crash, remembered him as a “strong” and positive person. Ryan Pourjam, in his speech, described his father, Mansour Pourjam, as a man without “any trace of negativity in his voice or actions”.

According to news website Today, Ryan spoke about his father during a memorial at Carleton University in Ottawa, Canada, on Wednesday – a week after Mansour Pourjam lost his life when Iran mistakenly shot down a Ukrainian airliner, killing 176 people. At least 57 Canadians died in the crash, most of them of Iranian descent.

“I can’t remember a single moment in my life where Mansour, my dad, had any trace of negativity in his voice or actions,” Ryan said in his heartbreaking speech that struck a chord with thousands on Twitter.

While so many of us struggle to find the words to express our sadness over the many lives lost in last week’s horrific plane crash, 13-year-old Ryan — who lost his beloved father, Mansour — shows unbelievable poise in the face of extreme tragedy. We can all learn from Ryan. pic.twitter.com/L5fePoKiKN

Ryan finished his speech by thanking the audience for attending his father’s memorial service, and was met with thunderous applause.

People on Twitter, where the eulogy video has been viewed tens of thousands of times, praised the teenager’s dignity and maturity.

Wow…to Ryan…Mansour must have been a wonderful teacher, he taught you strength, dignity & grace. Thank you for sharing ????
Condolences to your family and all families affected by this tradgedy. Much love to all of you.

Ryan, you are incredible. I’m sorry this happened. I trust your dad’s words will comfort you and strengthen you throughout your life. Your heartfelt words are inspiring.

I have no words adequate or eloquent enough to describe what grace, dignity & strength this young man has. The world will be a better place because of the gift his fallen father bestowed upon us all raising this young man. Deepest sympathy to him & all blessed to know his father.

According to Ottawa Citizen, Mansour Pourjam, 53, worked at a dental clinic in Ottawa, Canada. He grew up in Tehran and moved to Canada to attend Carleton University.

Over 200 people attended the memorial service held for him and another victim, Fareed Arasteh.

Ashish Yadav and Neha have appealed to the central government to bring them back to India.New Delhi: An Indian couple...

Russian artist Pyotr Pavlensky speaks during a press interview at his lawyer's office in Paris.Paris: French police held a Russian...

Rockets Land Near US Embassy In Iraq Capital: Report

All You Need To Know About ‘Functional Food’